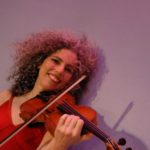 Alicia Svigals is the world’s foremost klezmer fiddler, a founder of the Grammy-winning Klezmatics and a 2014 NEA MacDowell Fellow in composition. “The Yellow Ticket,” a very early production of the German film company UFA-Pagu, was made at the end of World War I and on the eve of the Russian revolution. It stars an adolescent Pola Negri, who would later become the legendary femme fatale of the silent era, and tells the story of an innocent young Jewish woman from a Polish shtetl who is constrained by anti-Semitic restrictions to lead a double life in a brothel while attempting to study medicine in Tsarist Russia. The film includes precious footage of the former Jewish quarter of Warsaw and the people who once lived there.

Pre-eminent film scholar Tom Gunning said about the score:  „I believe this accompaniment to The Yellow Ticket is one of the most powerful I have heard. It evokes not only a sense of the contemporary context of the culture in which the film took place, but our awareness of what was done to it afterwards. The sound of piano, violin and the human voice evoke passion, energy and a profound sense of mourning, bridging the historical distance between us and this film as eloquently as does Pola Negri’s extraordinary face.“

Composer/musician Alicia Svigals is the world’s leading klezmer violinist and a founder of the Grammy-winning Klezmatics, which she co-directed for seventeen years. She has written for violinist Itzhak Perlman, the Kronos Quartet, playwright Tony Kushner, documentary filmmaker Judith Helfand, singer/songerwriters Debbie Friedman, Diane Birch et al, and has collaborated with them as a performer and improviser as well as with poet Allen Ginsburg, Robert Plant and Jimmy Page of Led Zeppelin, Gary Lucas and Najma Akhtar, and many others. She has appeared on David Letterman, MTV, Good Morning America, PBS‘ Great Performances, on NPR’s Prairie Home Companion, Weekend Edition and New Sounds, and on the soundtrack for the L-Word.

Svigals was awarded the Foundation for Jewish Culture’s annual New Jewish Music Network Music Commission for her original live score to the 1918 film the Yellow Ticket, which she is currently touring, and a Trust for Mutual Understanding grant to bring that work to Poland next year. This past season she was a fellow at LABA – a non-religious house of study and culture laboratory at the 14th St. Y in NYC which every year invites a group of artists to consider ancient texts and create work that pushes the boundaries of what Jewish art can be; while at LABA she composed a song cycle based on Yiddish poetry.

Svigals was a MacDowell Fellow in summer 2014; during her residency there she worked on her score to Brewsie and Willie, a film based on Gertrude Stein’s last book, to be released in 2015.

Jazz pianist/improviser Marilyn Lerner performs to acclaim internationally, from her native Montreal to Havana, from Jerusalem to Amsterdam and the Ukraine. Her musical career has been marked by a deep exploration of traditional and free jazz, new music tinged improvisation, and Ashkenazic folk music. Lerner has appeared with Tito Puente, Gerry Hemingway, and Steve Lacy. In the New Jewish music scene, she performs with Adrienne Cooper, Frank London, Alicia Svigals and David Wall.