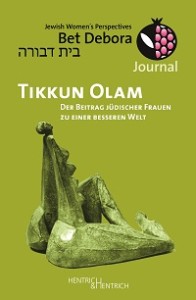 Tikkun Olam, the act of “repairing the world”, was the theme of the 6th international Bet Debora conference that took place in Vienna in February 2013. A selection of topics,results and conclusions drawn from some of the discussions have been collected in this volume.

Women from 14 countries share and reflect on ways of strengthening Jewish life and paths towards a better world in general.  In the first section of the publication, Jewish women reflect on their efforts and experiences on the path towards building a better world. Dr Helga Feldner-Busztin, who survived Theresienstadt with her mother and sister, became a respected doctor in postwar-Austria and raised four children. Michala Raggam-Blesch gives a summary of the panel discussion with Vera Rollig and Marianne Degginger who described their difficult survival of the Shoah and the continuous struggle to live in Berlin and Vienna as “Mischlinge” (a Nazi term which literally translates to “half-breed”). Shirly Pitz and Elvina Gavriel are two young voices speaking from and of the Sephardic community, a group which constitutes half of the members of Vienna’s Jewish community as a whole. They talk about the balancing act that is the oscillation between the traditional image of women upheld by their families and community, and their desire for self-realization in terms of career as well as their private lives.

Rabbi Judith Edelman-Green and Rabbi Tamara Benima tell us what they appreciate about working with small Jewish communities from India to the Netherlands. Focusing on England and Switzerland, Sarah Sheppard points out the benefits of small groups for those in Jewish youth work. In the category “women’s organizations,” Marija Salom investigates the evolution of such groups in the former Yugoslavian region; Svetlana Yakimenko introduces “Project Kescher” in countries that once belonged to the Soviet Union; and Hava Burgajer illustrates the motived behind her involvement with WIZO.

In the category “traditions,” Mira Mayer tells us of the important Bulgarian-Jewish Arie-family with a focus on their extraordinary women in the 18th and 19th century. For Gaby Steiner and Talin Bahcivanoglu, a kitchen in Berlin becomes a space where they enter into an Armenian-Jewish cultural dialogue, sharing memories of food and family. Agata Kaplon and Anna Adam show that it is very achievable to refer to Jewish religious tradition as a model for an eco-conscious way of living; and Andrea Pető suggests new ways of Holocaust-remembrance.