Information on the Program

Eating your way through the conference 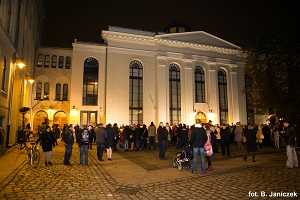 We want to invite all interested men and women from all branches of Judaism to the European Capital of Culture 2016 – to Wroclaw/Breslau in Poland!

The date of the conference is set to remind us of the eventful history of the Jewish men and women in Breslau and in Europe at large: On September 1st 1939, the German Wehrmacht attacked Poland, thus triggering World War 2. By the end of this, the Jewish community of Breslau, which was the third-largest in Germany at the time, was erased. Breslau became the Polish Wroclaw. September 4th 2016 marks the European Day of Jewish Culture, a day dedicated to promoting the knowledge of European Judaism, its history and present. In 2016 it engages with the topic “Jewish languages”, a theme which we would like to discuss in our conference as well, for German, Yiddish (in the immediate post-war period) and Polish characterized the Jewish living environments in the city.

In the 19th and early 20th century, Breslau was an important intellectual and cultural center for German Judaism and played a key role in the process of the emancipation of Jewish women. The latter manifested itself in a proposition of a commission on the religious status of women put force during the third Assembly of German Rabbis in Breslau in 1846 suggesting the objective of equality between the genders in their religious rights and duties. Unfortunately this point was not discussed and the proposition was forgotten for a long time. Jewish women promoted their emancipation in the secular realm. When German universities opened their gates to women the percentage of Jewish students was above average and in Breslau even higher than in other cities. Jewish women came to shape local culture, art, and scholarly pursuits, and formed the vanguard of the women’s movement and education. Since the end of the war, Wroclaw (as it is called today) is part of Poland. The present-day Jewish community is central in Poland’s Jewish renaissance, helped hugely by the conference’s co-organizer Bente Kahan Foundation’s and its wide-ranging involvement.

Recalling the city’s complex German-Polish history and its Jewish community, we want to evoke its legacy and honor all that Jewish women have contributed to the formation of a lively and diverse Judaism in the past and present, as much as to their commitment to fighting for a tolerant and pluralist Europe. The conference will offer an unique opportunity to find out more about contemporary Jewish life in Poland, and to meet interesting Polish-Jewish women including activists, artists, film directors and writers.

With our conference’s theme “Creating Alternatives”, our aim is to encourage a conversation about the organization of Jewish living environments that enable equal opportunities and access for women, both within pre-established structures and by means of creating alternative spaces. We want to discuss what interests and wishes women have formulated, which motives they give and their chosen spheres of action, with an emphasis placed on the work of women in art and culture.

We hope to inspire an exchange of thoughts and ideas among people of different backgrounds and are addressing academics, students, rabbis, artists, activists, politicians, teachers, child carers, laywers and all those who share in the concern for the future of Jewish life in Europe, and womens active part in shaping it. We have invited speakers from Eastern and Western Europe, Israel and the USA. The conference language will be English.

Sponsored by the Rosa Luxemburg Foundation, The Westbury Group and the American Jewish Joint Distribution Committee.