studied library science and management of cultural and non-profit organizations, and works for a Jewish organization in Berlin. She has done extensive research on Jewish history in Berlin’s Pankow district for several book projects and exhibitions at the Pankow Museum. In the 1990ies she was instrumental in organising a Rosh Chodesh group and an egalitarian minyan in Berlin. In 1998, together with Elisa Klapheck and Rachel Monika Herweg, she launched Bet Debora, the Jewish women’s initiative, and organized the first three conferences for European female rabbis, cantors, Jewish activists, and scholars, held in Berlin between 1999 and 2003. She is co-chair of the Bet Debora association and one of the editors of the interreligious magazine INTA – Interreligiöses Forum. 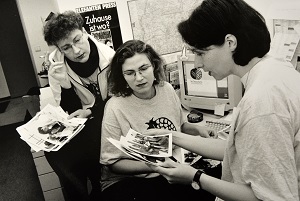 Is a Jewish scholar, educator and practising family therapist. She ran the youth department of the Jewish Community of Berlin, she was an assistant professor at the Free University (Berlin) and the manager of the German Association for Educational Science. She is one of the founders of Bet Debora, author of, among others, „Die jüdische Mutter. Das verborgene Matriarchat“ („The Jewish Mother. The Hidden Matriarchy“, Darmstadt1994) and editor of the CD-ROM “Tour durch die Bibel” (ORT Germany inc. 1999)

Elisa Klapheck (b. 1962, Düsseldorf) has been involved in the renewal of Jewish religious tradition since the 1990s. In 1999, she was one of the founders of “Bet Debora.” In the same year Klapheck published a book about the first female rabbi in history (Regina Jonas 1902-1944). As a consequence, Klapheck decided to strive for the rabbinate herself. In 2004 she received her smicha at the Aleph Rabbinic Program. In the following four years she lived in Amsterdam and became as the rabbi of “Beit Ha’Chidush” (www.beithachidush.nl) the first female rabbi in Dutch history. In 2009 Klapheck moved back to Germany and is since then rabbi of the “Egalitarian Minyan” in the Jewish Community of Frankfurt a. M. (www.minjan-ffm.de). An important topic of hers is the relationship between political ideas and Judaism. Among her publications are the books “Fräulein Rabbiner Jonas – The Story of the First Woman Rabbi” (1999, English translation 2004), “Bertha Pappenheim – Gebete/Prayers” (with Lara Dämmig, 2003), and “Thus I Became a Woman Rabbi: Jewish Challenges Here and Now” (2005). She recently obtained her doctoral degree with a dissertation on the Jewish religious philosopher Margarete Susman. (See also www.elisa-klapheck.de)