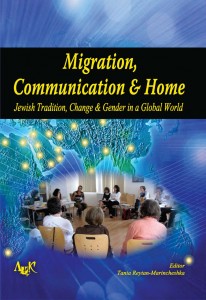 The question of what could be the balance between cultural globalization and the ongoing striving for a reach and dynamic cultural diversity of each ethnicity, community and people is at the core of this volume.

In “Migration, Communication & Home” nineteen participants of the 2009 Bet Debora Conference, Diaspora and Israeli Jews and non-Jews, explore these three metaphors and concepts through the lens of their own identities, life journeys and values. The contributors to this volume are activists, academics, anthropologists, artists, cantors, rabbis, sociologists, writers, etc., and all of them, women and men of rich and dynamic personalities, professionals in their specific areas, as well as experienced and thoughtful members of diverse Jewish and/or Migrant Communities around the globe. One of the values of this mixture of academic and non-academic approaches is its ethnographic authenticity and the potential of experimental novelty. The 2009 Bet Debora Conference, organized in Bulgaria was a fertile ground for research and a case study in itself. Although anthropology originally emerged as a way for outsiders to study and understand foreign cultures, the anthropology that the contributors of this volume practice, is of a somewhat different sort: they provide an insider’s view of cultures and traditions that are their own, however diverse. Thus, in pursuing their concrete themes, the authors of this volume care not only of exploring Jewish identity through the notions of migration, communication and home but also of contributing to the broader project of how to preserve particular ethnic and religious cultures within the very diverse and controversial contexts of humanism and often dehumanization.

Cross-disciplinary in its scope, this Bet Debora project has provided a springboard for opening a dialogue, between a diversity of approaches, exploring the representation of Jewish migration, mobility and identity mainly from a non-essentialist perspective, but on the background of differing and opposing views, and with a passionate concern about the crisis Israel is going through.

Tania Reytan-Marincheshka was born in Plovdiv, Bulgaria. She lived and studied in Bulgaria, Russia, and USA. She holds an MA in International Relations and a PhD in Political Philosophy and has specialized in International Law, Social Anthropology and Human Rights. In the 1980’s and 1990’s she was a human rights activist. She created and directed till 2001 a joint UNHCR/BHC program & network on “Refugees’ and Migrants’ Legal Protection”. Since 2002 till today, she performs field and scholarly research, publishes and teaches. She was a scholar-in-residence at HBI, Brandeis University, MA, USA, taught Human Rights & International Relations at Sofia Univer­sity and was a visiting professor at Utica College, NY, USA. Since 2003 she is a member of the European ‘Bet Debora’ movement and organized the 5th ‘Bet Debora’ Conference in June 2009, in Sofia, Bulgaria. As of July 2009 she is an active member of the ISSRPL network. Tania has two daughters and a grandson and lives in Sofia.